A Miswak or Siwak, the twig a majority of people from Muslim countries use daily to brush their teeth, is an alien thing to most people in the Western world. Although it might sound outdated to use twigs from trees to clean one’s mouth and teeth, studies conducted on the Miswak prove otherwise, inferring that the Miswak is better than toothpaste for preventing gum disease.

The reason for common use of the Miswak by Muslims can be attributed to religious beliefs. The Holy Last Messenger of Islam, Muhammad (peace be upon him), used the Miswak frequently and instructed his followers to do the same.There are 70 benefits of Miswak as known through ancient Islamic literature.By the grace of Almighty, seeds sown to form younger Aalims with both Islamic knowledge and Worldly knowledge in society by Aalim Research Institute supported by UNIPRO started to blossom flowers of knowledge. These younger Aalims have done research entitled “Miswak – An Islamic Medicine” and documented various scientific evidences and medical benefits of using miswak such as improving healthy life of human being, acting as a barrier for various chronic diseases and so on.

UNIPRO quenched it’s long thirst of creating influential and dynamic Aalim community for the socity in all aspects during submission of Scientific Research on using Miswak by Aalims in ARI’s First Islamic Research Program held on March 9,2016 at Haj Service Society, Chennai. ARI honors nutritious efforts of UNIPRO during the program. All praise and gratitude to Allah and may Allah create such a knowledgeable Aalims abundant in the society 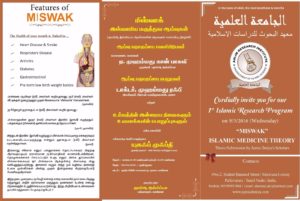 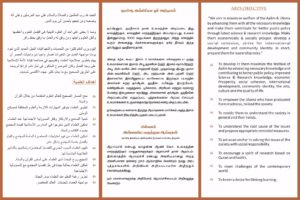 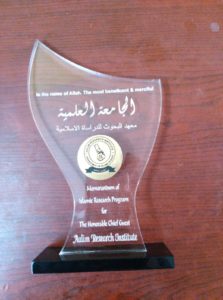